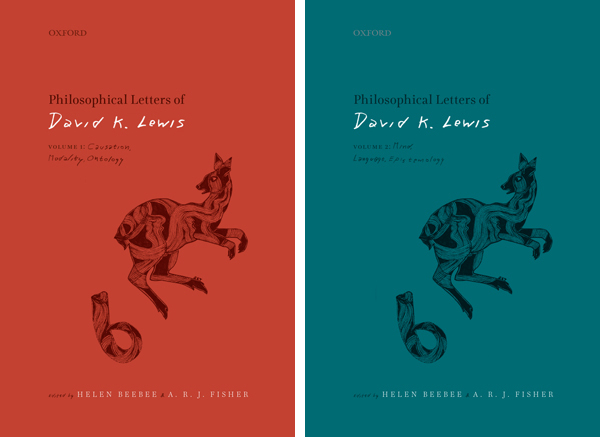 David Lewis (1941-2001) was one of the most influential analytic philosophers of the twentieth century. He made substantial contributions to philosophy of language, philosophy of mathematics, philosophy of mind, philosophy of science, epistemology, decision theory, and most significantly metaphysics. More than that, he set the agenda for many debates in these areas. To this day his work is widely read and remains part of contemporary discussion. Furthermore, enough time has passed for historians of philosophy to study the later stages of the twentieth century and its relation to the rest of it and to us right now. Thus Lewis’s place in the history of analytic philosophy is of growing interest to historians of philosophy.

Lewis published over 100 articles and four seminal books throughout his career. But one way he did philosophy – perhaps just as important as his published writings – was in the form of letter-writing. He constructed, developed, and refined his philosophy through a life-long correspondence with approximately 1000 other philosophers – some of whom are leading figures such as D.M. Armstrong, Saul Kripke, W.V. Quine, J.J.C. Smart, and Peter van Inwagen. His correspondence is vast, about 16,000 pages in total (this figure includes letters from and to Lewis). His letters were the undercurrent of his published writings, the medium through which he proposed his well-known theories and discussed a wide range of philosophical topics in depth. His letters reveal a story about the origins and development of his thought, detailing how he came to endorse various doctrines. Some letters clarify his views. Others offer new arguments for his theories or alternative formulations of his views. Still others contain rich, substantive comments on someone else’s views (usually a competitor’s) that often advance his own views in an illuminating way. Some others contain arguments that are not explicit in his published writings, not to mention historically significant exchanges that have altered the face of analytic philosophy such as his discussions with Armstrong about natural properties or his correspondence with van Inwagen about possible worlds or his letters to Smart about the identity theory of mind. Other letters provide cases of Lewis ‘talking back’ in such a way that he adds a new step in a current dialectic. Others contain Lewis’s reflective thoughts on his philosophical development. (A notable feature of Lewis’s published work is that he rarely engaged in detailed discussion of other philosophers’ work. That is to say, while there are ample published responses to Lewis’s views, there are few follow-ups by Lewis to those responses. His correspondence, on the other hand, does contain detailed discussion of others’ views and objections that are largely absent from his published work.)

Philosophical Letters of David K. Lewis is a two volume work of Lewis’s letters, carefully selected, categorised, and edited with an Introduction (for each volume). Volume 1 is causation, modality, and ontology; Volume 2 is mind, language, and knowledge – all of which are broadly construed. This work will be the definitive edition of his correspondence. It aims to lay out for the philosophical public the origins, development, breadth, and depth of Lewis’s philosophy in its historical context. It will offer a new window into his philosophy, sometimes with new arguments and different opinions to what he stated in his published writings. It will provide exciting new material for students of Lewis’s philosophy and for scholars focused on analysing his place in the history of analytic philosophy and studying the history of late analytic philosophy. It will be an indispensable resource for Lewis scholarship and will fuel further research into his contributions to philosophy. It will further the legacy of his work and help sustain his influence into the twentieth-first century.