In April 2016 David Lewis’ correspondence, manuscripts, and other papers were kindly donated to the Princeton University Library by his widow Steffi Lewis. The body of material is now known as the David Lewis Papers.

The David Lewis Papers can be broken down into four main parts: 1) his correspondence, 2) his student papers and course notes, 3) offprints of his published work with drafts, and 4) his unpublished papers.

David Lewis was a prolific letter-writer. He maintained a professional correspondence from about 1960 to his death in 2001. He responded dutifully to almost every letter he received and kept a copy of almost every letter he sent. He engaged in lengthy and detailed discussions on a plethora of philosophical topics. His collection of letters amasses to approximately 16,000 pages, both incoming and outgoing correspondence. He corresponded with about 1000 other philosophers. Out of the 16,000 pages approximately 13,000 pages is of substantive philosophical content. Lewis used letter-writing as a way of doing philosophy. He would often write letters to colleagues or friends about a particular theory he was attracted to and based on this letter would write a draft of a paper that would in turn become an ancestor to an article. Many philosophers, often his colleagues or friends, would write to Lewis asking for comments on one of their papers or manuscripts. In reply Lewis gave detailed comments, reactions, suggestions, counter-arguments, etc. He would do the same for his many students who went on to become leading philosophers. As a result, he contributed to the work of others and affected the thinking of many other philosophers of the twentieth century. His correspondence in its own right is, therefore, a contribution to analytic philosophy and an important resource for understanding the development of analytic philosophy in the late twentieth century. His correspondence can also be seen as the undercurrent of Lewis’ published work and so in this respect it is invaluable for understanding the formation, continuity, and evolution of his thought.

Here is the top 10 list of largest correspondences between Lewis and interlocutor:

David Lewis wrote a large number of essays for the many philosophy courses he enrolled in or audited as a student. He began his undergraduate studies at Swarthmore College in 1957, studying Chemistry, French, German, and Calculus. His first philosophy class was in the fall of 1958 (Phil 1 ‘Intro. to Philosophy’ by Jerome Shaffer). In his second paper for this class he proposed his counterfactual theory of causation. For the 1959-60 academic year Lewis traveled with his father to Oxford where Lewis was enrolled in the PPE program at St. Catherine’s College. He was tutored by Iris Murdoch and attended lectures by J.L. Austin, A.J. Ayer, Isaiah Berlin, H.L.A. Hart, Gilbert Ryle, among others. During this year he wrote approximately 14 short essays, mostly related to ethics, free will, moral responsibility, free trade, but there are sketches on Godel’s theorem and nominalism. Upon returning to Swarthmore Lewis’ interest in philosophy grew rapidly. He eventually changed his major to Philosophy (in June 1961 to be precise). He then wrote about 38 short essays on a wide range of philosophical topics such as Descartes, Leibniz, Hume, Kant, the a priori, free will and determinism, ethics, moral philosophy, aesthetics, philosophy of mind and perception. 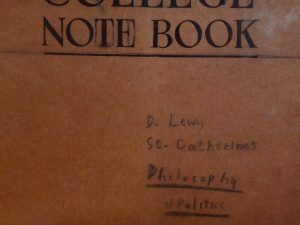 One of Lewis’ notebooks as an undergraduate at the University of Oxford, 1959-60.

In 1962 Lewis went to Harvard University where he pursued his PhD in philosophy. He came to Harvard with interests mostly in ethics and philosophy of mind. His honours thesis at Swarthmore was titled ‘Can Ethics be Reasonable?’ supervised by Monroe C. Beardsley. However, his interests quickly shifted into philosophy of language, philosophy of science, logic, and metaphysics through his encounters with W.V. Quine, Nelson Goodman, D.C. Williams, and Israel Sheffler. From this period Lewis continued to produce large sets of notes on lectures by his teachers and seminar papers, some of which were eventually published. For instance, his first publication ‘An Argument for the Identity Theory’ (Journal of Philosophy vol. 63, 1966) was based on ‘How to Establish the Identity Theory’ – a term paper for D.C. Williams’ Phil 157 Metaphysics: Problems of Cosmology (spring 1965). From 1962-65 Lewis was very active at the Hudson Institute, writing technical papers on game theory. This work proved fruitful as it formed part of the basis for his dissertation Conventions of Language. Many of these student papers and some of his course notes are preserved in the David Lewis Papers. They provide a completely unique perspective on how to understand the formative years of Lewis’ thought and give us a window into exactly when he took up a particular doctrine that became a fundamental part of his philosophical outlook.

David Lewis published about 110 articles and four books. Many of his articles were published as volumes of collected articles. For every article or book that he published Lewis had a corresponding folder that contained drafts, revisions, and related correspondence (mostly pertaining to the mechanics of publishing) of the work in question – along with offprints. These folders are voluminous given that Lewis published so much throughout his career. Just like his correspondence and his student papers and course notes this material opens up new avenues into understanding Lewis’ philosophy. Since the early drafts of his published writings are present with the final version, we can identify pieces of evidence that allow us to infer the origin, say, of a certain thesis or argument held by Lewis. To illustrate, Lewis published ‘How to Define Theoretical Terms’ (Journal of Philosophy vol. 67) in 1970. In the ‘How to Define Theoretical Terms’ folder there exists his seminar presentation handout and a related seminar paper on ‘Reduction of Theories’ from Israel Sheffler’s Phil 249 Philosophy of Science – spring 1964. In this course Lewis was instructed to study Sheffler’s The Anatomy of Inquiry (Knopf, 1963). In this book Sheffler systematically expounds a Humean theory of explanation, but most interestingly discusses F.P. Ramsey’s theory of theoretical terms at length. This seems to be one source for Lewis’ familiarity with Ramsey’s theory in the context of introducing new terms into one’s theory. Without these folders we would lack this sort of evidence.

Throughout his career David Lewis left many papers unpublished. Some of these papers were eventually published posthumously, but many others are yet to see their way into print. His unpublished papers span the length of his career. There are several papers of length and still more that consist of replies to various philosophers such as Robert Adams, Donald Davidson, Richard Montague, and John L. Pollock. A handful of these papers date from 1999, 2000, and 2001. These later papers show us where Lewis’ work was going had he continued to live. The topics range from truthmaking, causation, events, causal explanation to free will, decision theory, Godel’s theorem, and paradoxes about truth, belief, and knowledge. Like the other parts of the David Lewis Papers, the unpublished papers are important for assessing Lewis’ philosophy as a whole and the development of his thought from his time as a student in the early 1960s to him becoming one of the most influential philosophers of the twentieth century.